Fly in on a plane, experience the English Channel on a ferry, go hi-tech on Eurostar or go budget on a bus. The way you travel to London is a crucial part of your encounter with this wonderful city. Most transport choices - aside from the cheapest bus tickets - work out much the same in price, provided you take advantage of advance deals. Here's our guide on ways to travel to London, with some insider tips to help you decide what's best for you. 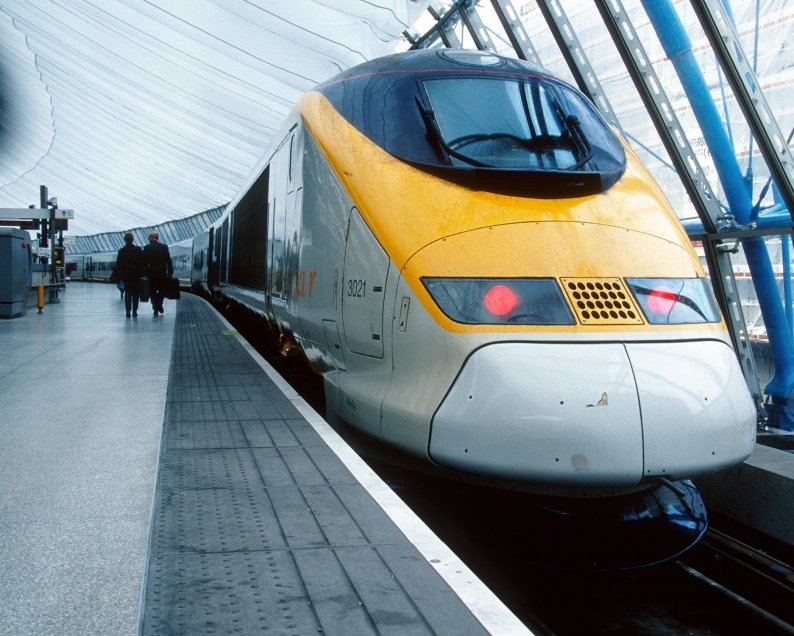 One of the most efficient and enjoyable ways to reach central London from continental Europe is to use the Eurostar high speed train service. Eurostar trains use the 50 km (31 miles) of the Channel Tunnel, opened in 1994, as part of the journey to London's St Pancras International Station. St Pancras is just to the north of central London and has links to every other part of the capital on both the London Underground and on the capital's bus services. You could also choose to take one of London's famous black cabs, available on a rank just outside. St Pancras, with its soaring 19th century arches and neo-Gothic facade, offers travellers the sense that they've arrived somewhere truly special. The station has had a high-tech makeover in recent years and there are numerous cafes and restaurants - as well as a Champagne bar for the indulgent.

Top travel tip: Booking in advance offers the best prices and you could pay as little as £29.99 if you book six months ahead. Eurostar tickets generally cost about £120. 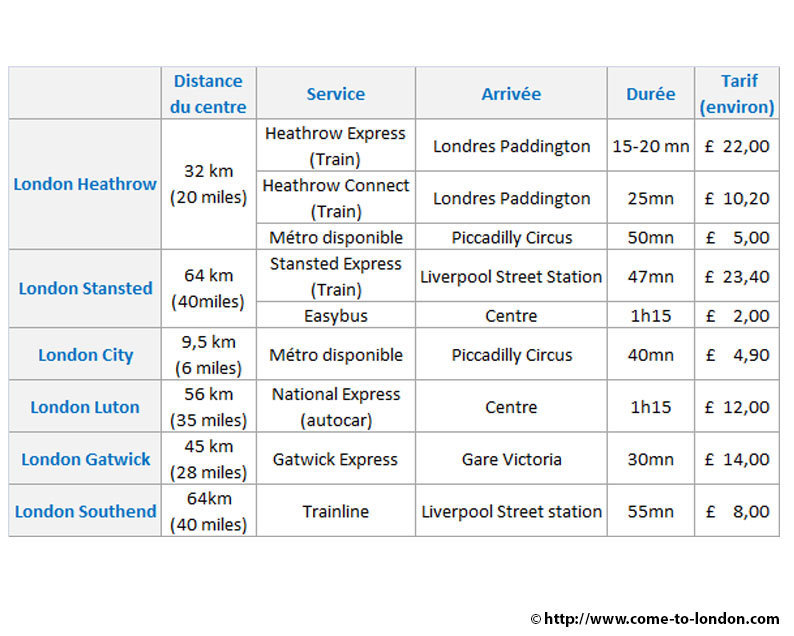 Flying to London could not be easier. London is served by six airports, varying in size and distance from the capital. London Heathrow, to the west of the centre, is by far the largest of the airports, followed by London Gatwick, to the south. London City Airport is the closest to the centre of the city, being just to the east, while London Luton and London Stansted, both north of the capital, and London Southend, in the county of Essex to the east, are the furthest away. Among the airlines which fly to London are the budget carriers Ryanair and EasyJet as well as many national carriers such as British Airways and Air France. Prices, best booked as far advance as possible, begin at about £50. Whichever airport the airline of your choice flies to, there are easy and efficient connections to central London. All costs are approximate. 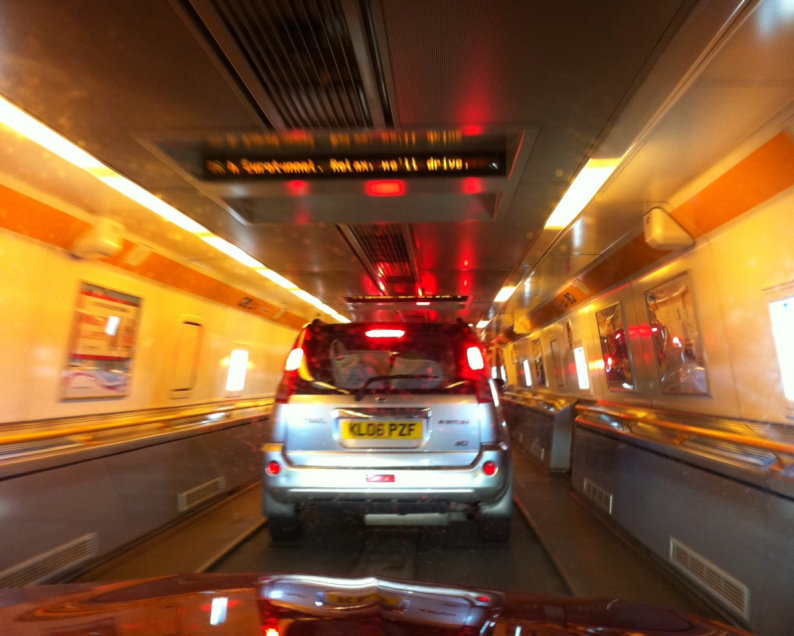 3By car from mainland Europe

Some travellers to London prefer to bring their own transport with them. While parking in the capital can be expensive, many hotels offer special deals which include parking. The advantage of having your own transport is the flexibility it offers, particularly on trips out of London. Travellers should note, however, that London's Congestion Charge is levied on all but the most fuel efficient vehicles on inner London's roads. This currently costs £11.50 for each journey in and out of the Congestion Charge zone.

Ferry: Travelling by ferry is an evocative way to reach London and one of the oldest, allowing travellers to experience the English Channel that separates Britain from Continental Europe. The Calais-Dover crossing is the quickest for travellers headed to the British capital, with the ferry journey taking about 90 minutes. Both DFDS Seaways and P & O offer frequent ferry services, with the best value offered on bookings made in advance. The road journey from Dover to London takes just under two hours.

Eurotunnel: This is the fastest cross-channel service, whether you're travelling by car, bus or in a commercial vehicle. Vehicles are loaded onto a high-speed Eurotunnel train at Coquelles (Calais) and the English terminal is just outside the coastal town of Folkstone. Folkstone is linked by the M20 motorway to the M25, which encircles the capital. The Eurotunnel journey takes about 35 minutes, with a further one hour 45 minutes needed to reach central London.

Tickets on either ferry or Eurotunnel cost from about £59 for a weekend round-trip booked in advance. 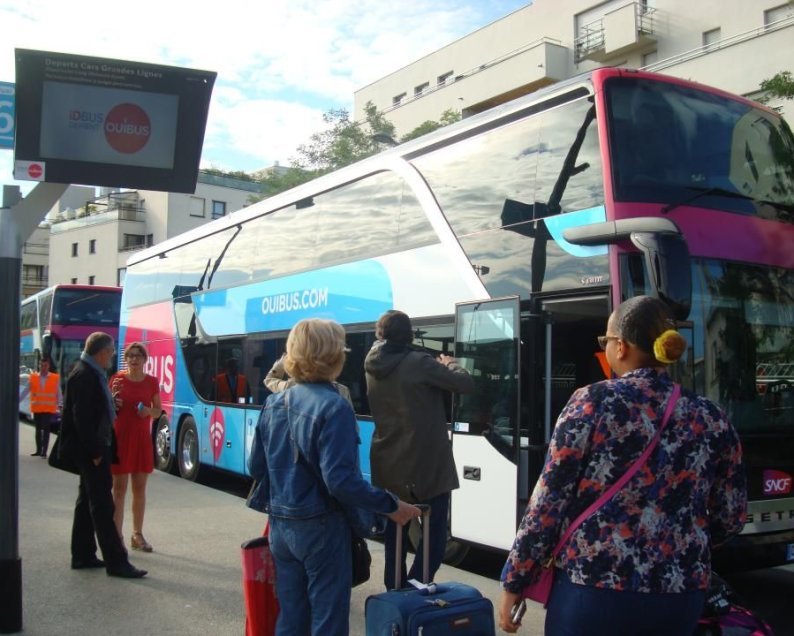 London is accessible by bus from almost all major European cities. For travellers with the time to spare, this option of travel to the British capital is certainly the cheapest and offers the full experience of a grand European road trip without the added stress of driving. Facilities on the latest generation of buses, from comfortable leather seats to Wi-Fi on some services, now rival those offered by airlines. This extra comfort goes some way to off-setting the journey time, with even the fastest bus being slower than any other means of getting to London.

Top travel tip for best value on bus travel to London: Look for the special offer advance fairs on: IdBus, National Express and Megabus. Like budget airlines, the fewer people have booked on a particular service, the cheaper the tickets are. Travelling at unsociable hours often attracts the cheapest fares.