TOP 10 things to do in London

London is one of the most beautiful cities in the world with many historical monuments, parks and museums, but also a warm and cosmopolitan atmosphere. Discover our selection of the must-see places to visit in London. 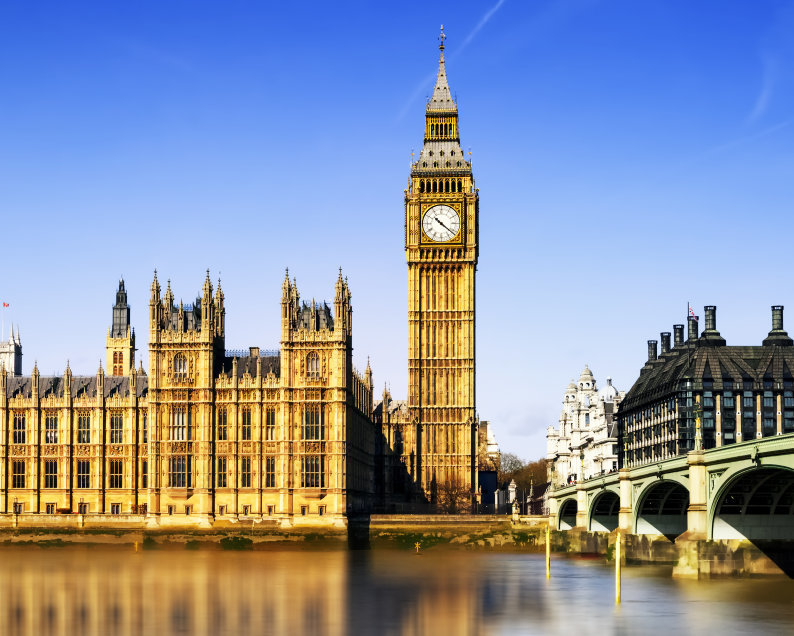 Think London, think Big Ben. The glorious neo-Gothic clock tower soaring over the majestic Thames next to Westminster Bridge is rightly considered symbolic not only of London but of the whole of the United Kingdom. Big Ben isn't really the name of the tower at all, but of the huge bell within that strikes every quarter hour. Elizabeth Tower, as it is properly known, is named after Queen Elizabeth II, who opens parliament each year. The intricate design dates from the 19th Century and is the work of the master architect Augustus Pugin. He was also responsible for the ornate interior of Westminster Palace, the seat of the British parliament of which the tower forms a part. The best views are from just across the road, on Parliament Square, just beneath the looming statue of Winston Churchill. 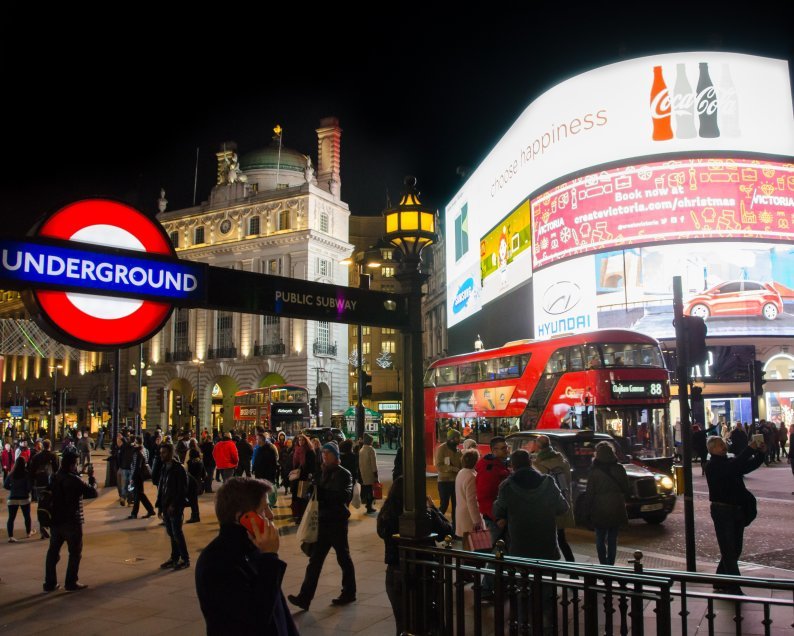 Quite simply one of the most famous crossroads in the world. With its multi-coloured neon billboards flashing their messages, Piccadilly Circus is the very heart of London's West End and has featured in movie after movie about the British capital. Always throbbing with life and featuring the famous statue of Anteros, the Greek god of unrequited love, Piccadilly Circus is best seen at night when the lights are at their brightest with red buses and black cabs bustling past taking passengers to performances at the nearby theatres. The beautiful Criterion Theatre, one of London's most famous, is on the south side. In case you're wondering, the Latin word for "circle" gave Piccadilly Circus its name. Today this vibrant place is an essential stop for any visitor. 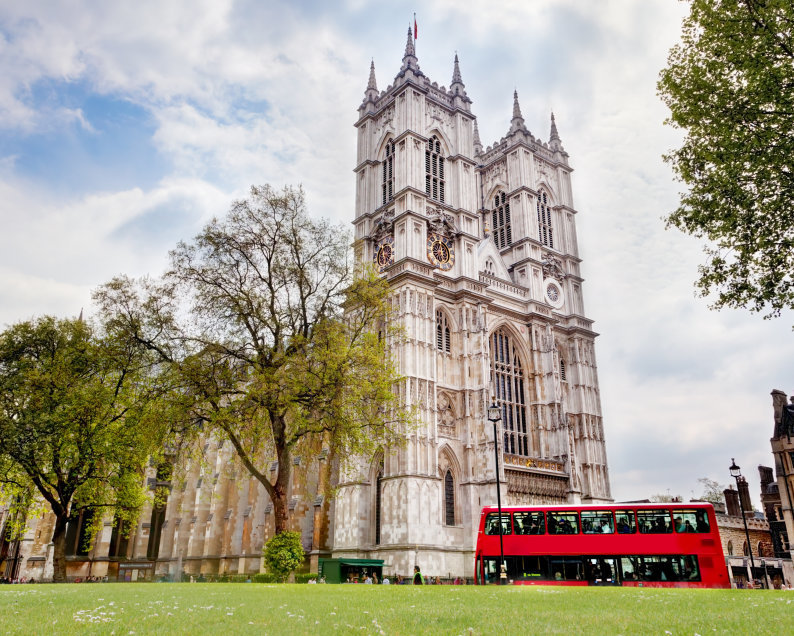 A place that breathes British history. Here the nation witnesses its grandest events, from the crowning of every monarch since 1066 to the glamour of the marriage of Prince William to Kate Middleton, now the Duke and Duchess of Cambridge. Westminster Abbey's appearance today is the result of building and rebuilding over a turbulent history, often at odds with parliament at the Palace of Westminster nearby. The famous towers in pale Portland stone were designed in the 18th century in a Gothic Revival style by the renowned church architect Nicholas Hawksmoor and now frame the huge entrance doors. UNESCO has declared Westminster Abbey a World Heritage Site and today it is under the direct jurisdiction of the Queen, who was herself both crowned and married at Westminster Abbey. Walk in, and the sights and sounds of hundreds of years are somehow still there. 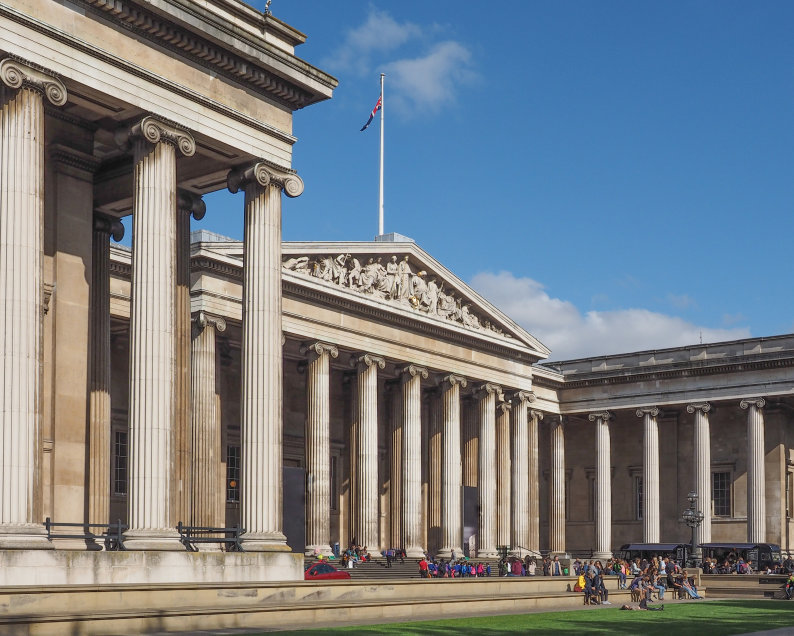 A glorious treasure trove with breathtaking riches at every turn. There's free entry to this beautiful building and its eight million objects ranging from the largest collection of Egyptian antiquities outside Egypt itself to the famous - or infamous - Elgin Marbles from the Parthenon. There's gallery after gallery exhibiting the most desirable pieces from every region on the planet. Officially dedicated to "human history, art and culture", there's so much to see that the casual visitor is best advised to wander around, picking out a piece to gaze at. The Great Court, designed by the leading contemporary architect Sir Norman Foster, opened in 2000 as a huge indoor piazza with the famous circular Reading Room, now an exhibition space, at its centre. One of the world's greatest museums and an unforgettable experience.

Ask Come to London to help with an organised tour at the British Museum. 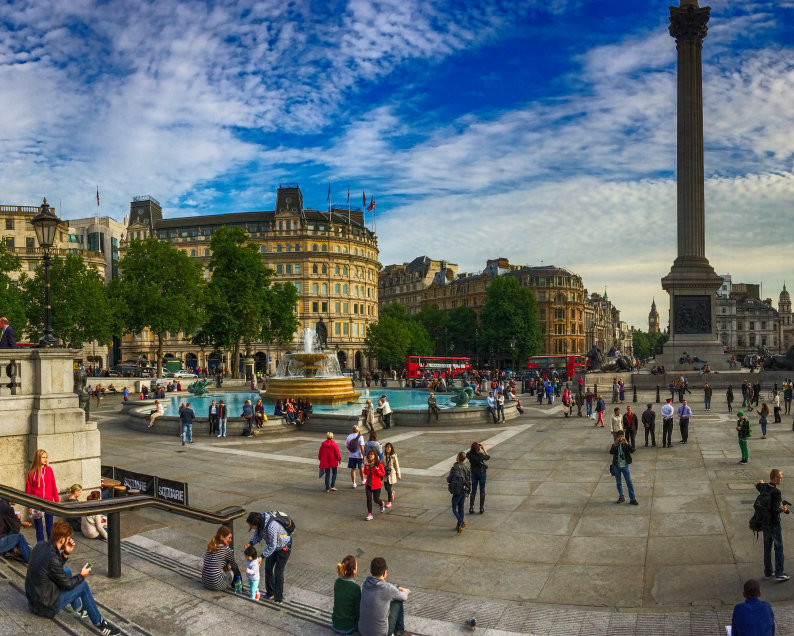 The capital's greatest meeting place features one of its most important landmarks. Nelson's Column soars over the square, marking the British victory in the Battle of Trafalgar in 1805 during the Napoleonic Wars. Huge stone lions guard the column and to the north are the striking buildings that house the National Gallery. Throughout the 20th Century the square has been a gathering point for political protest, from campaigns against nuclear weapons to anti-apartheid rallies. Today, it's also famous for the changing contemporary art featured on the otherwise empty plinth in the north-west corner. A short walk away are some of the capital's best-known stages such as Her Majesty's Theatre, where 'Phantom of the Opera' has been thrilling audiences since 1986. Every Christmas, there's a tree donated by Norway, in thanks for Britain's support in World War Two. Unmissable for any visitor. 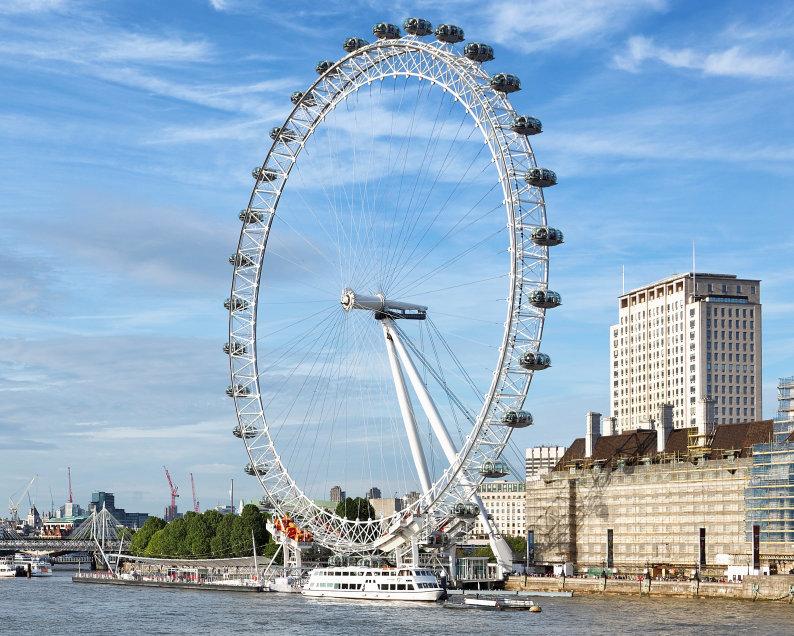 Prepare to be thrilled on a giant sightseeing wheel like no other. The London Eye is one of the capital's newest landmarks that's a favourite with both Londoners and visitors. Opened for the millennium celebrations on New Year's Eve 1999, the London Eye is a pioneering piece of design by the architects Marks Barfield, also responsible for the new i360 tower in Brighton. The London Eye's capsules, floated up the Thames when it was built, are mounted to the outside of the wheel itself and offer panoramic views over London and beyond. A ride takes 30 minutes and is the perfect introduction to London's complicated geography. From St Paul's Cathedral to the distant towers of Canary Wharf, London is laid out beneath you.

Booking in advance London Eye tickets with Come to London is advised to avoid the queues that form each day. 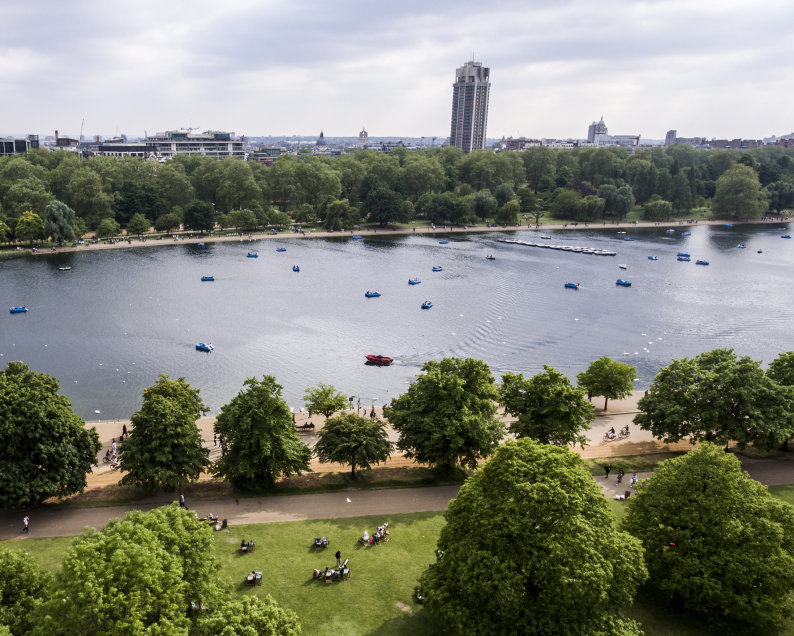 Welcome to green London. A royal park once reserved for hunting by kings and their privileged guests, Hyde Park is now a glorious open space welcoming to all. On the eastern boundary is Park Lane, one of London's finest addresses, while to the west is Kensington Palace, once home to Diana, Princess of Wales, now open to the public with tickets bookable through Come to London. A memorial fountain dedicated to Diana's memory is to be found adjacent to the Serpentine, the artificial lake at the park's centre. Nearby, the Serpentine Gallery, with free entry, features changing exhibitions by leading contemporary artists. Just beyond, to the west, is fashionable Notting Hill, home to the annual Notting Hill Carnival. In summer, join Londoners and take a picnic to Hyde Park on a fine summer's evening. 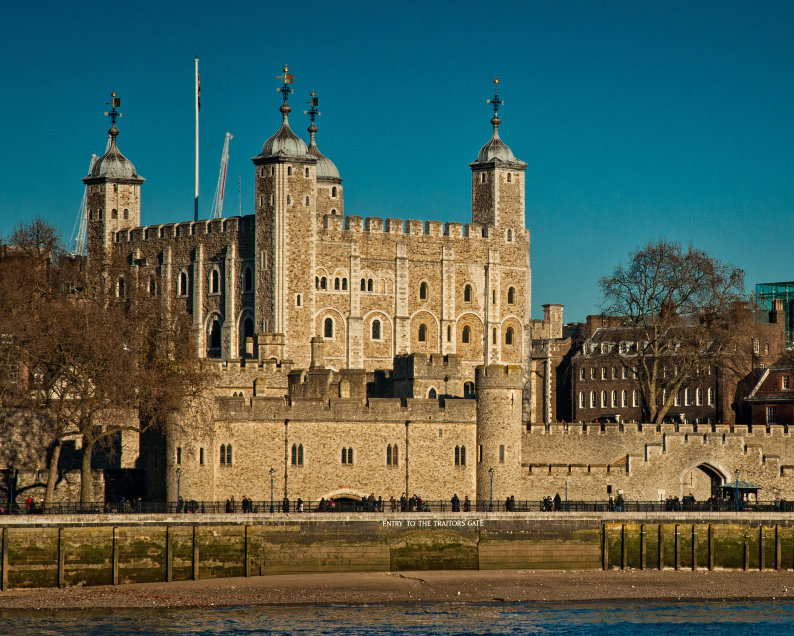 London's most forbidding landmark is an ancient castle. For more than 1,000 years the Tower of London has stood over the Thames and it now houses the Crown Jewels of England, still used by the Queen on state occasions and guarded by the Beefeaters, clad in traditional red and ready to defend against any incomers. Ravens inhabit inner courtyards and the legend says that when the ravens leave, the monarchy falls. So far, they've stayed. From traitors to notorious 20th century criminals, the Tower has incarcerated many within its white walls.

Come to London suggests a tour of the Tower of London. It's the ideal way to understand this astonishing place. 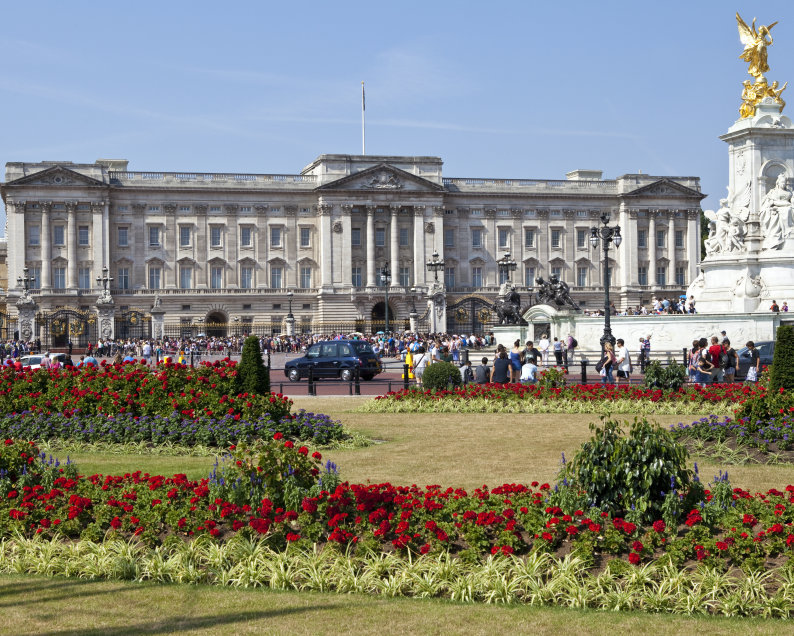 When the Queen's at home, her royal standard flies high above one of the world's most famous facades. Gazing down The Mall, which is lined with flags on state occasions, Buckingham Palace is the official headquarters of the British monarchy. Here, heads of state are welcomed with lavish banquets under the gaze of the Queen's impressive art collection. The guards outside may look colourful with their tall bearskin hats as they perform the changing of the guard, one of London's great free spectacles. In fact, they have serious intent and their guns are real. Laid out on either side of The Mall in front of the palace are St James's Park and Green Park, two of London's nine great royal parks. To the rear, Buckingham Palace's own gardens remain private, open only to the monarch, her family - and guests at annual garden parties. Some of the state rooms are open to the public in the summer and Come to London can book a tour.

Welcome to underground London. Browsing the stalls of Camden Market is a weekend tradition in the capital, with some 100,000 people visiting each Saturday and Sunday. Camden Lock is at the heart of it all, with the Regent's Canal inviting the visitor to walk west or east along the towpath, once used by horses pulling barges carrying coal and today used by joggers and cyclists. The Roundhouse arts venue, once used for turning locomotives, has hosted everyone from The Doors to Grace Jones and Come to London can help with tickets to the latest attraction at this evocative place. Camden is home to playwrights and pop stars as well as the latest on-trend designers. Visit and take a stroll through the real London.